An inordinate amount of time has passed since the Crucifix post #1.  To summarize, I was chosen from a field of 27 sculptors from the East Coast to create three sculptures for St. Joseph's Church in Millstone, NJ.  My good friend Jim Lewis of Icarus Furniture in Troy had put me in touch with the committee when he heard of the commission.  I thank Jim so much for this, as it changed my life.  Also for this help and hands on assistance when I needed him over the years. Thank you, Jim!

When I attended the first committee meeting in Millstone I expected to be asked to design and create a St. Joseph statue. I had with me a slide show of my Goddess figures in stoneware, as these (and a few small works from childhood and college) were my only religious pieces prior to that time. The committee was a wonderful group of dedicated people led by Balbina Faini. Halfway into the meeting I was taken aside and asked whether I would have an interest in creating also a life sized crucifix figure. I was not prepared for this, but felt very fortunate to have been asked, and that must have showed.

The committee chose one of the three models, or maquettes that I made, and I was able to explain my choices for pose and expression based on the Zugibe research.  I shared everything I had found with them.  My good friend Jim Moulton agreed to design an armature for the figure so that I could not only work from all sides, but turn the piece effortlessly on its base.  We formed and welded the armature at his studio in Porter Corners.  The frame allowed the figure itself to be removed when it was time for mold making and casting.  It all worked just as planned. 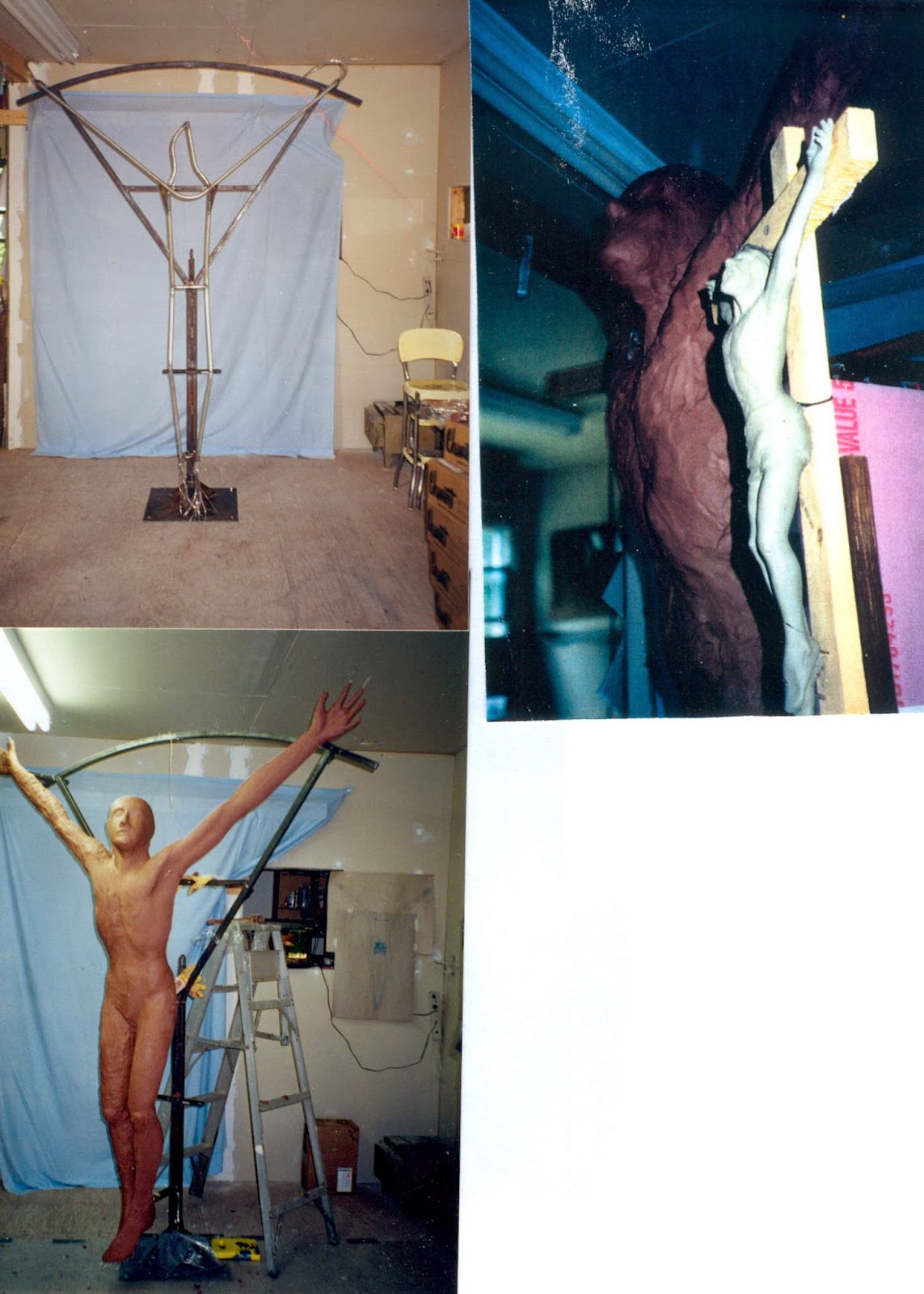 The armature was conduit pipe for the figure
and steel for the superstructure.  Small pipe fit into larger pipe installed on the floor
so that the entire thing could rotate 360 degrees.  Here is a shot of the maquette
next to the piece being made.  I chose CHAVANT clay, the Rolls Royce of modeling
clays, for the project.  Le Beau Touche type.  Marvelous. See box after box of Chavant
on the right of the armature picture. Here I have been applying clay.  One of the best parts of a project. 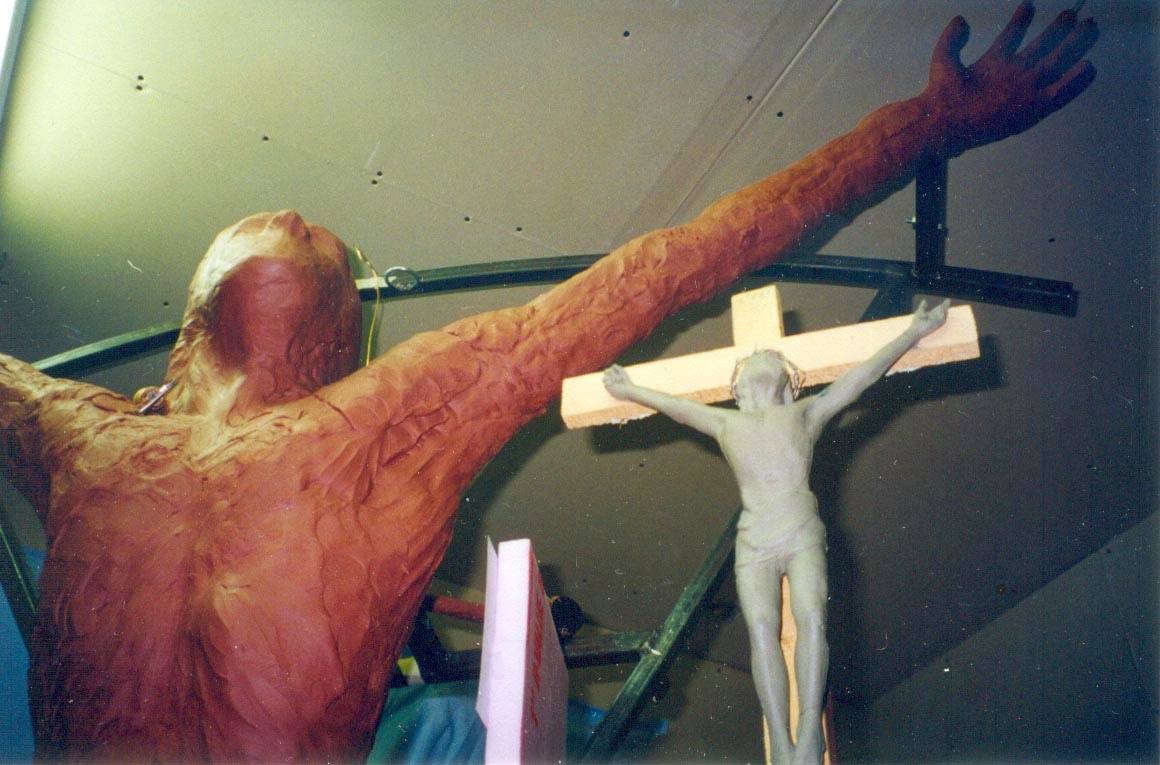 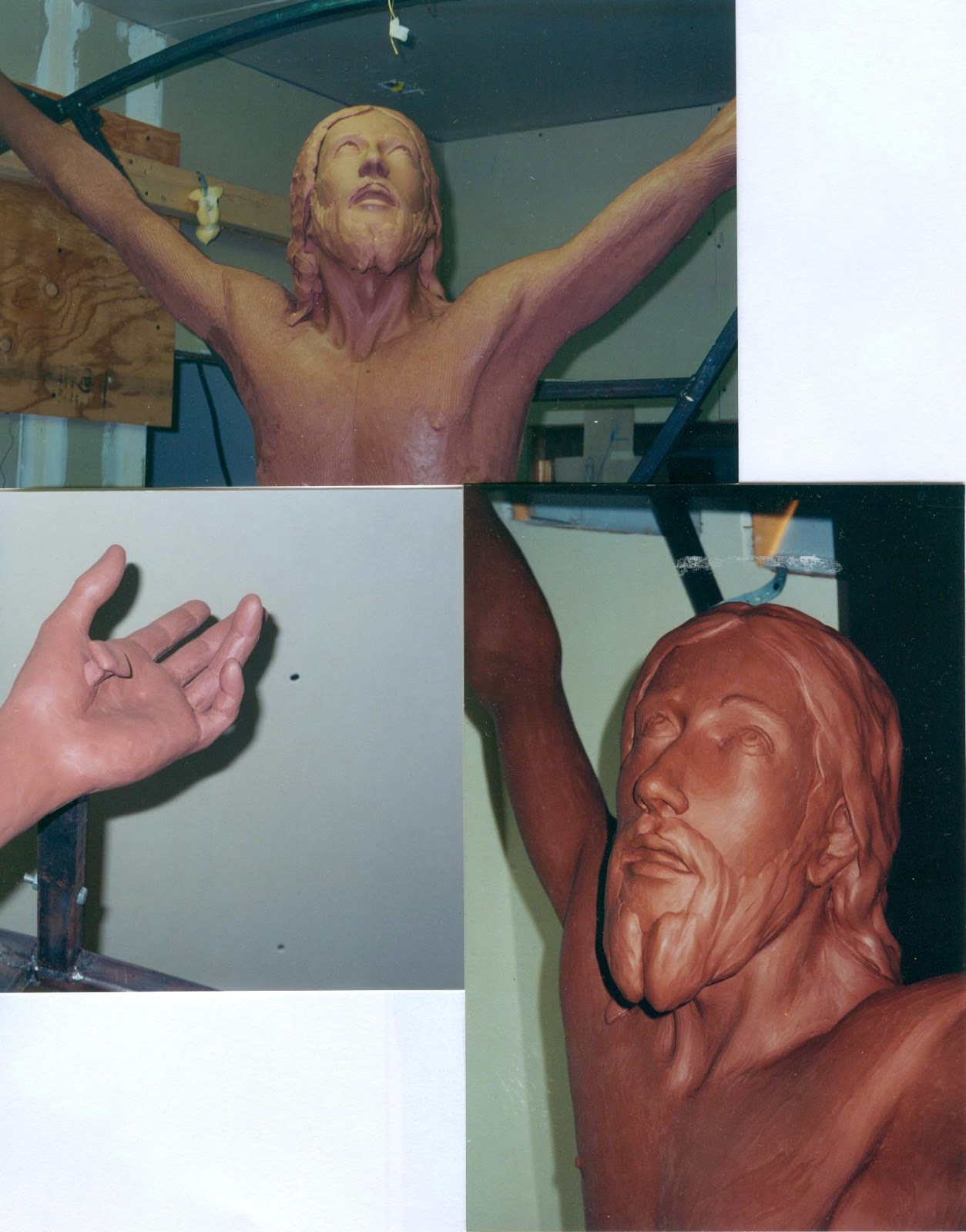 Continuing the sculpting. It was decided that
Christ, who 'sat at the right hand of God", would be looking up at him in his last moment of life.
With his right hand he would be holding onto precious life (the clenched fist).  With his left he would be reaching for his Father, for his destiny.  He asks "Why hast thou forsaken me?" And so he is speaking at the moment of death. My design differs from many that have been made over the millennia since the event in that Christ is alive, and not portrayed with his head slumped forward in death.
The nails, which would have been hand made and used on an important figure, are placed exactly as Dr. Zugibe has proven they must have been to hold a fully grown man. There is only one location where this is possible.  Most people, still today, believe the Barbet research from the 1940's.  I have found it very difficult to change any minds over this issue.  I retain all the images, experiments and etc. that Dr. Zugibe sent me, which served as the basis for my design. 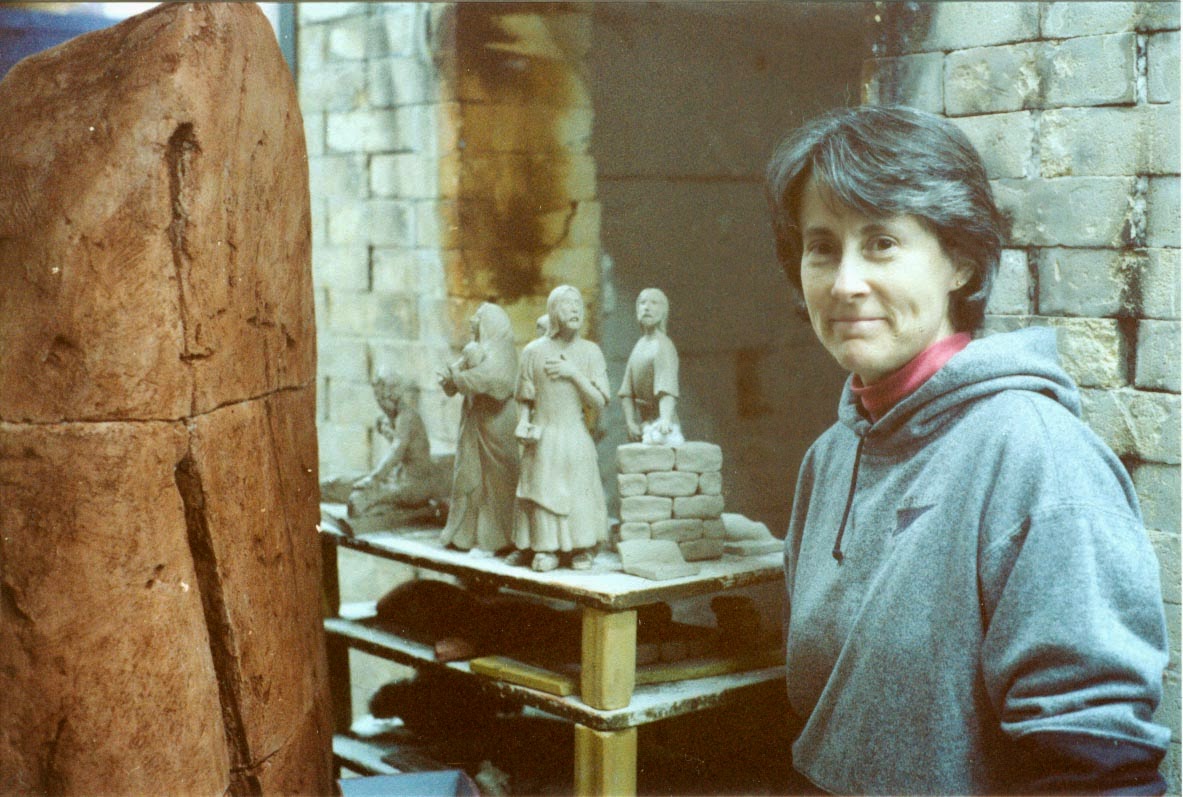 A very happy camper after being chosen to design and create not only the St. Joseph in life size, but a Mary with the Infant as well.  Loading "Papa" kiln at Skidmore College.  See Mary and two Joseph models.  They chose the one on the right so we could have Joseph the Carpenter at his workbench.  Replaced stone bench with one made of wood.
The large piece in this kiln?  Of course, by Tom Schottman.

More coming soon. The remainder of the crucifix project and the Mary and Joseph figures in progress, built hollow in stoneware and fired (!), all at Skidmore.
#St.Josephschurch
#Marywiththeinfant
#Crucifix
#Jimlewis
#Manzicrucifix
#Icarusfurniture